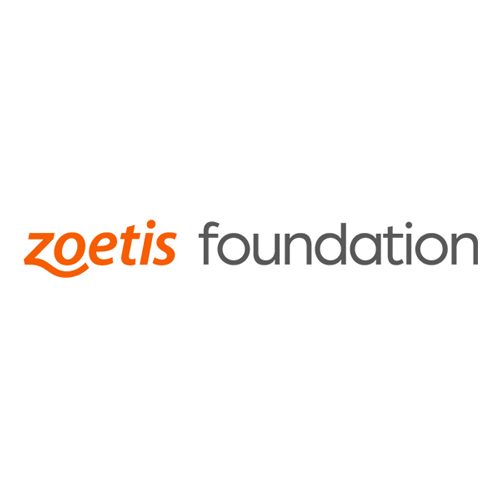 The Human Animal Bond Research Institute (HABRI) in partnership with Zoetis commissioned a survey of 18,145 dog and cat owners and 1,357 small animal veterinarians from nine countries, including Brazil, China, France, Germany, Japan, Mexico, Spain, the United Kingdom, and the United States. This survey, conducted by CM Research Ltd., was tested at a confidence level of 95% (p ≤ 0.05).

HABRI and Zoetis commissioned this survey to gain a deeper understanding of how the human-animal bond is perceived and impacts behavior among pet owners and veterinarians worldwide. The research shows that the human-animal bond is strong, that pets positively impact their owners’ health, and that stronger bonds are connected to improved veterinary care around the globe.

Key findings from this survey are as follows:

There was no correlation in this survey between the strength of the human-animal bond and income. 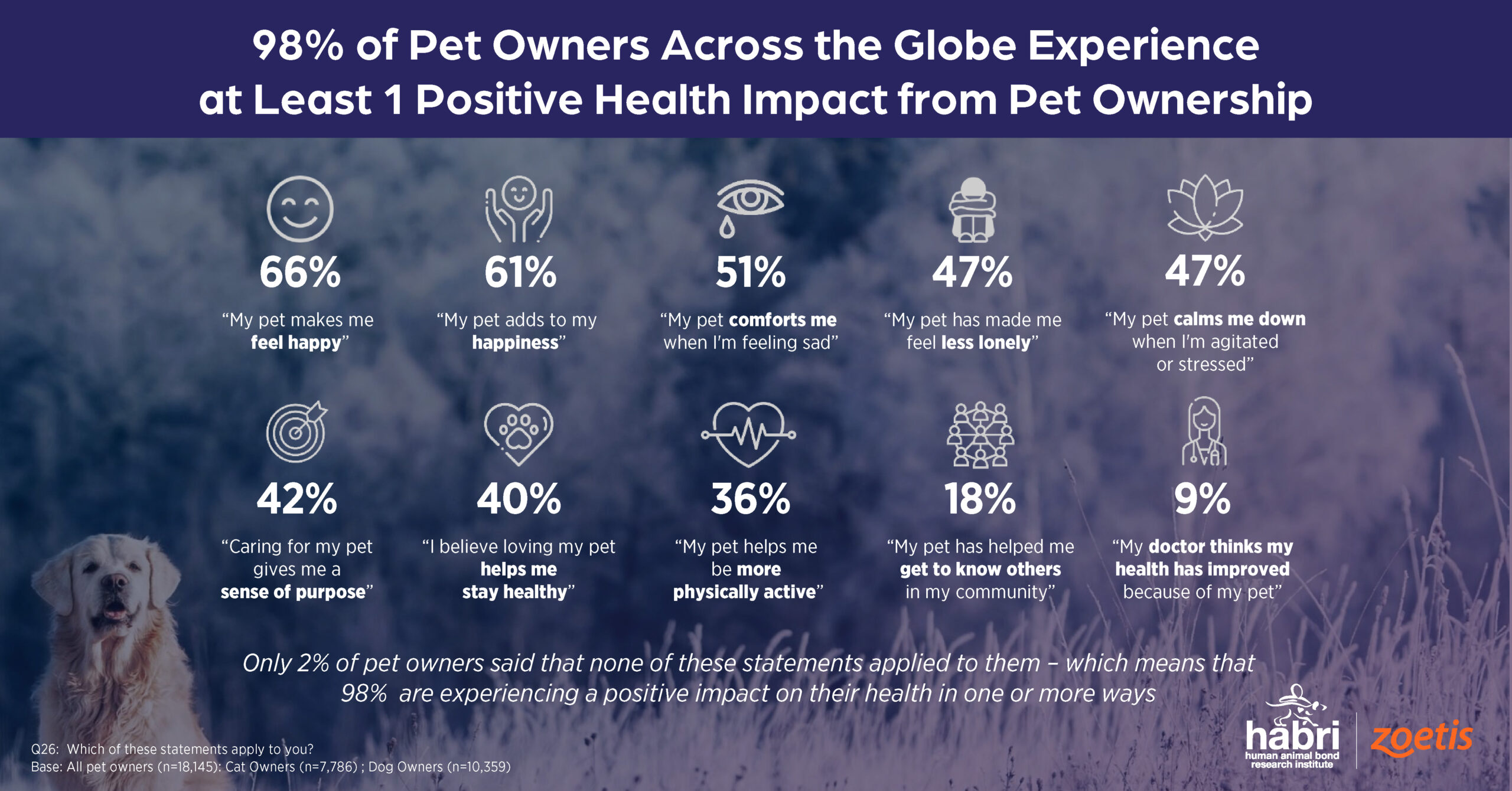 The total average HABSCORE is high at 57.4/70.0, indicating the human-animal bond is strong globally. The survey found no strong cultural differences in terms of how the bond is experienced and expressed. The researchers divided respondents into three HABSCORE tiers – Low (Less than 55), Mid (55-62), High (63 or more) – to look at how the relative strength of the bond can impact human and animal health. 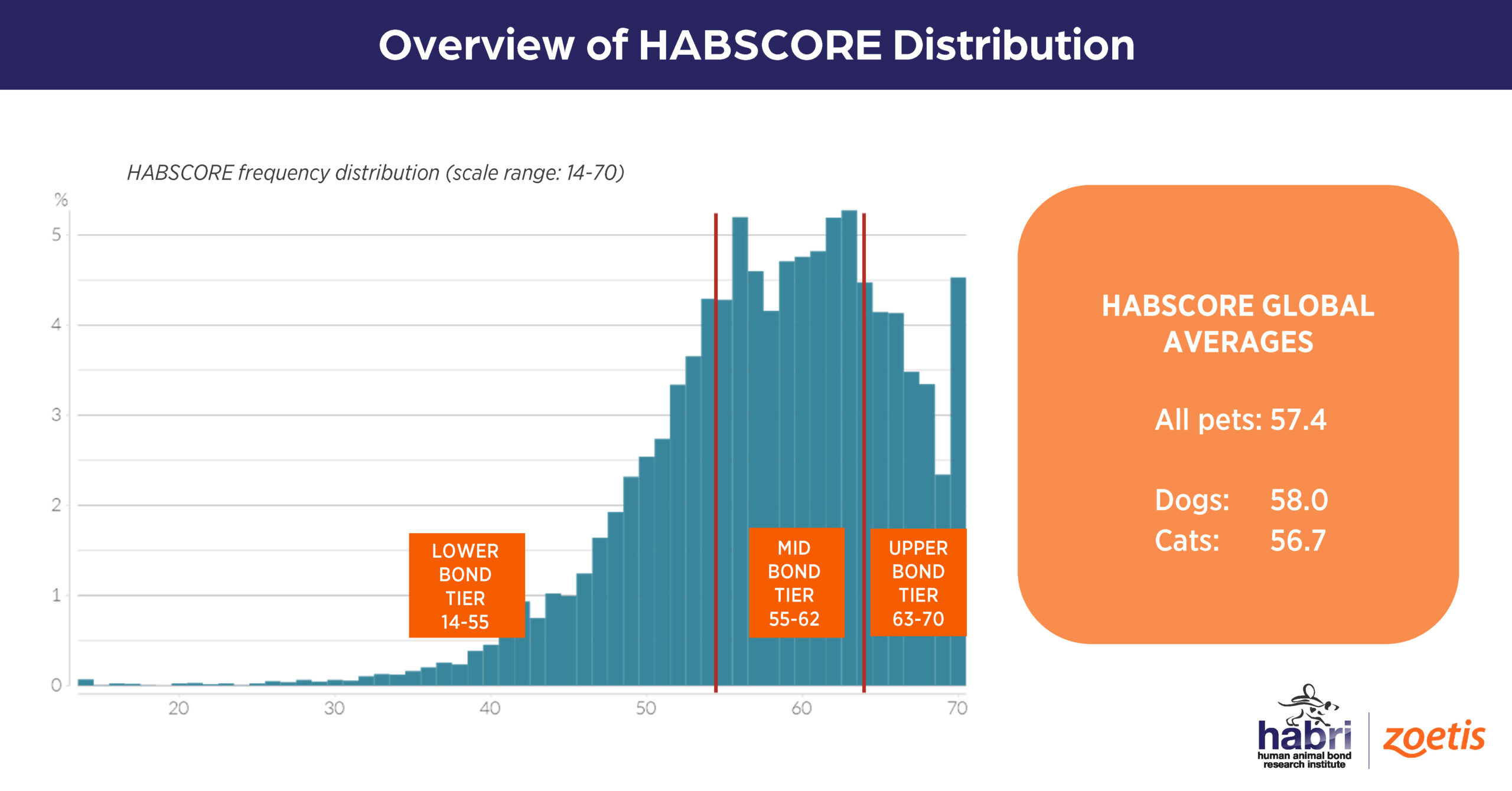 Veterinarians believe in the importance of the human-animal bond for their practice and profession, according to the survey of 1,357 small animal veterinarians from nine countries, including Brazil, China, France, Germany, Japan, Mexico, Spain, the United Kingdom, and the United States.

This survey found a strong correlation between both the strength and knowledge of the human-animal bond and better veterinary care. Veterinarians, by communicating and championing the human-animal bond, are critical to the effort and to improving health for both people and companion animals.

When pet owners were asked about how greater knowledge of the human-animal bond would impact their behavior in the future:

The stronger the bond, the higher number of annual vet visits pet owners tend to make, according to the survey. Global percentage of pet owners that visit the veterinarian two or more times per year:

Highly bonded pet owners are significantly more likely to report that they provide their pet with preventive care, when compared to pet owners in the lower third of the HABSCORE Scale, including: 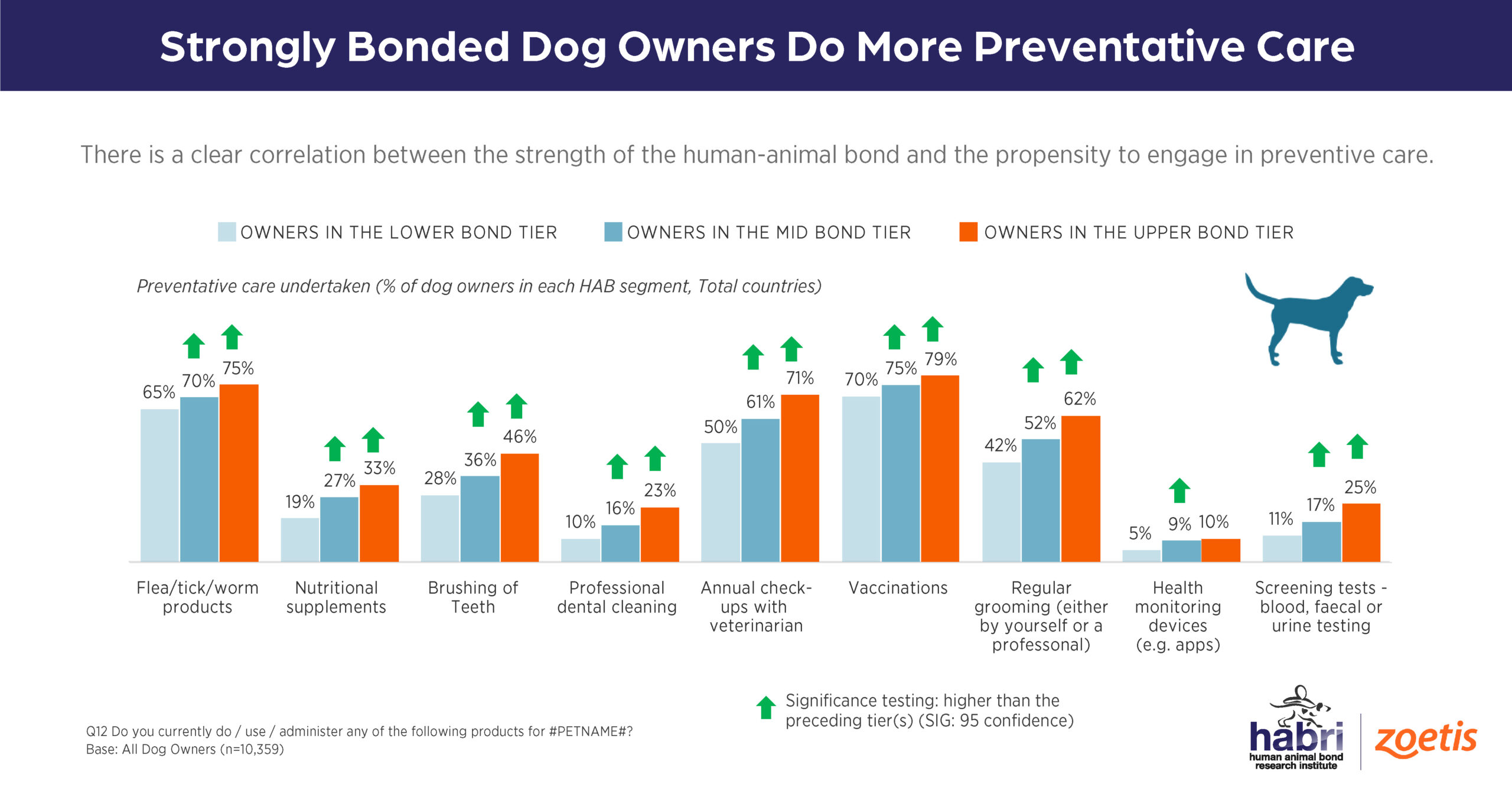 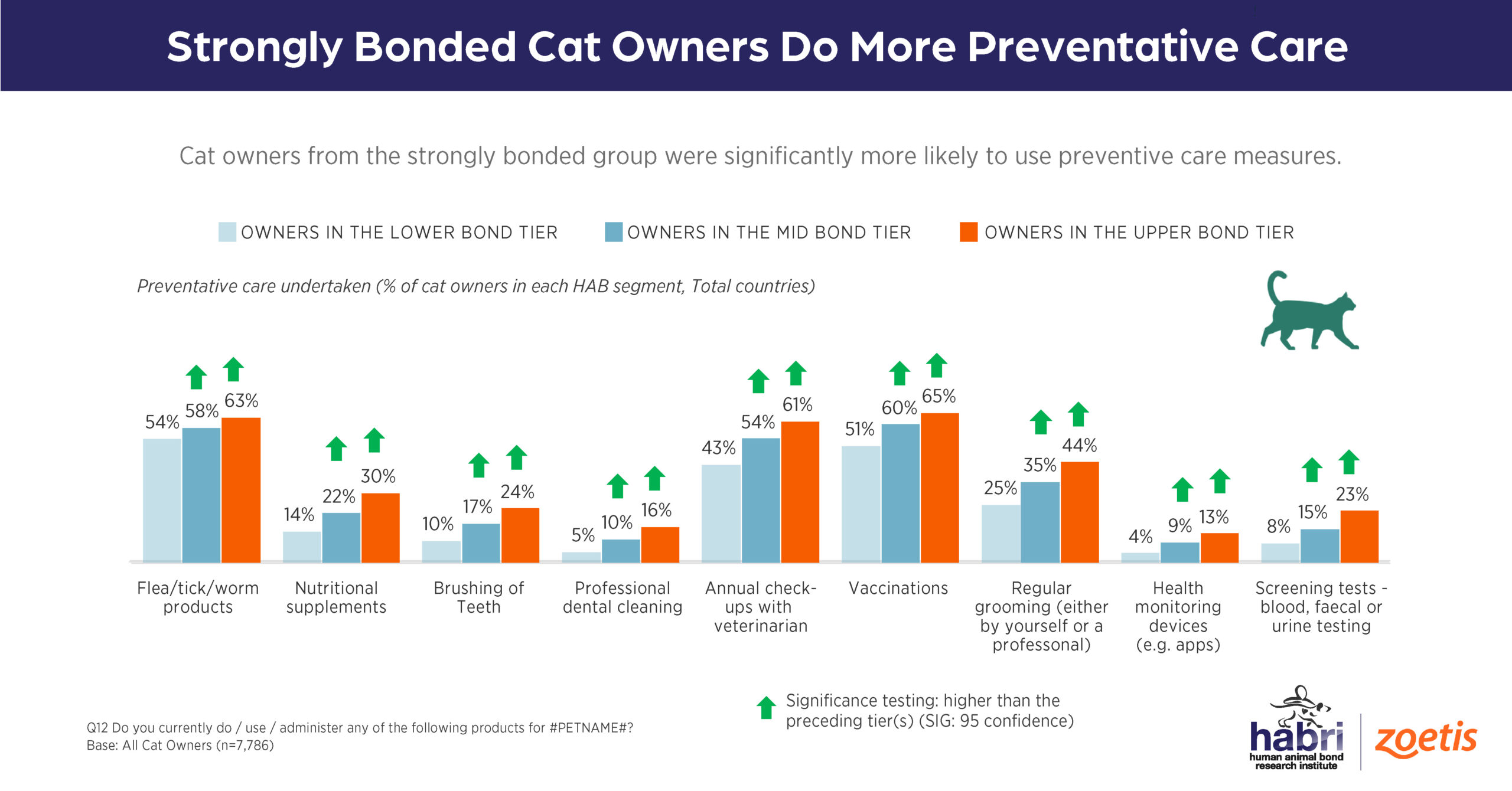 Highly-bonded pet owners are most likely to have consulted a veterinarian for specific symptoms experienced by their pet, when compared to pet owners in the lower third of the HABSCORE Scale, including: 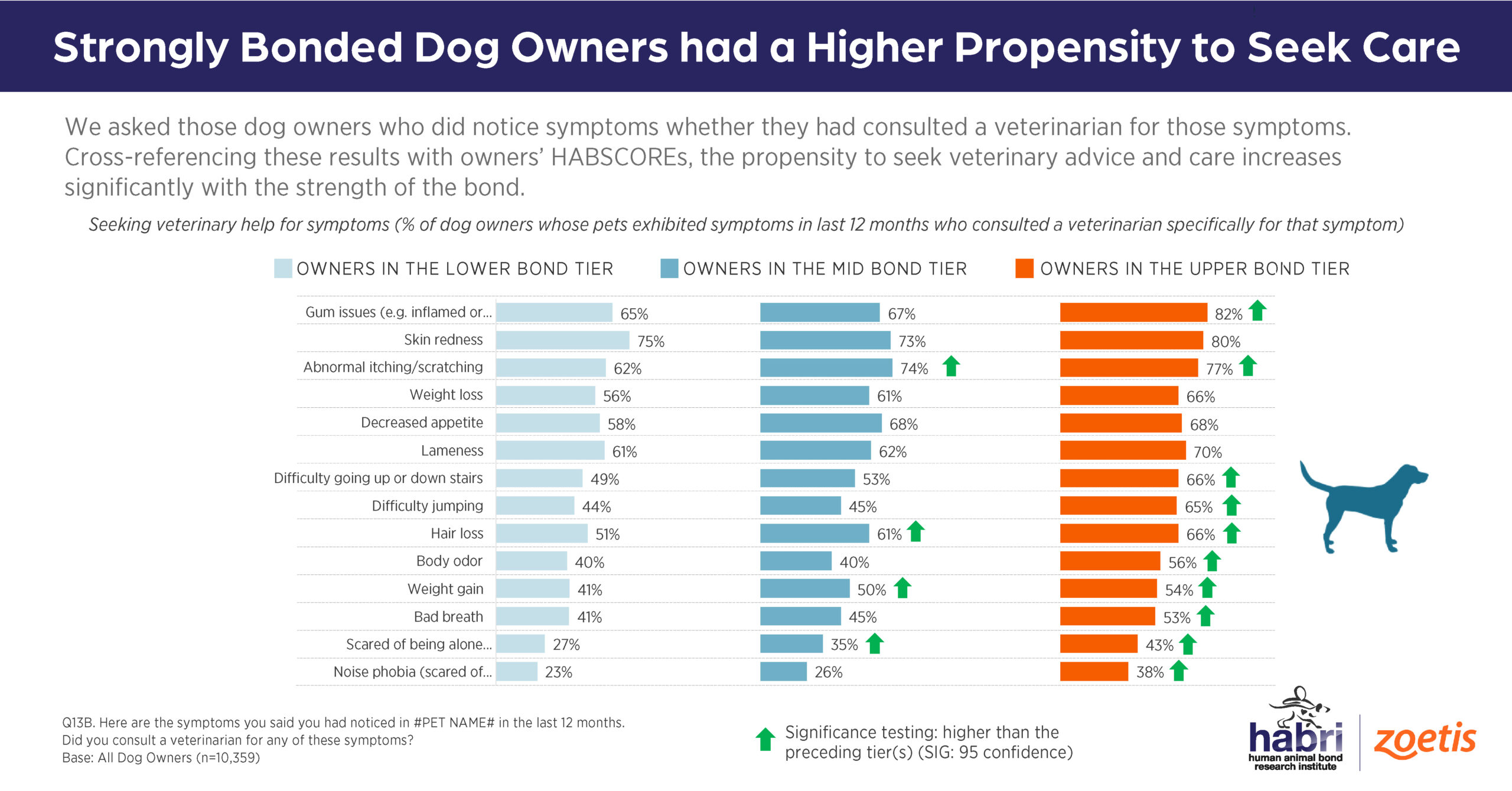 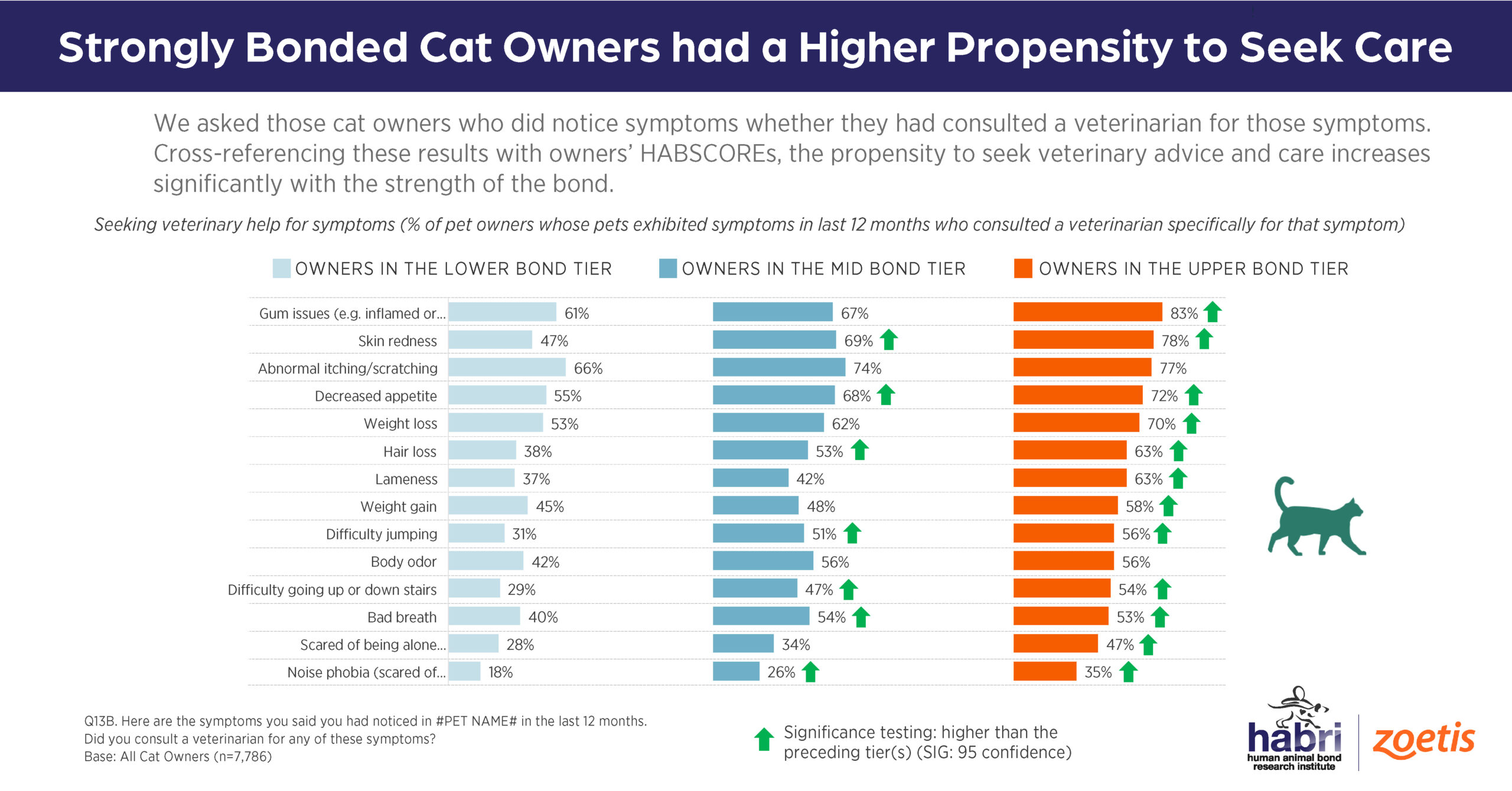 The following is a series of downloadable resources highlighting the results of the International Human-Animal Bond Survey.

To quantifiably measure the human-animal bond among pet owners on a global basis, researchers developed HABSCORE, a scale that builds upon scientifically-validated academic research.

Please feel free to share these graphics on your social media channels, websites, and blogs, and to share with your colleagues, friends and family.